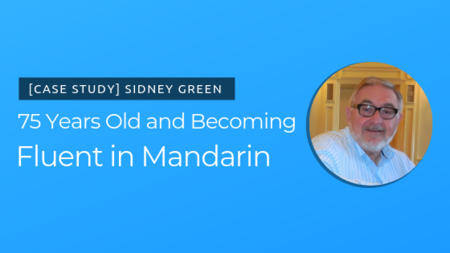 "I was totally frustrated, couldn't do it. I used textbooks, but they were so dull, challenging, and being 75, I began to believe the myth that maybe I was too old.

But that was wrong, of course."

I'm 75, and I'm a retired Anglican church minister and university lecturer. I've been married to my wife Jackie for 51 years this year. I have three boys, two of them are married, four grandchildren, and they're all in Australia with us now.

In my retirement, I did a Ph.D. here in Australia, and this is where my interest in Chinese began as there were many Chinese students in the program.

What problem were you facing that caused you to search for a Chinese course?

I started to learn Chinese, or better put, tried to learn Chinese. I was totally frustrated, couldn't do it. I used textbooks, but they were so dull, challenging, and being 75, I began to believe the myth that maybe I was too old. But that was wrong, of course.

However, they were talking about 'making movies' to learn Chinese, and I thought, 'what are they on about?'

First I joined the pronunciation course, and I loved it and loved Luke & Phil and how they teach. So I thought, okay, let's push the boat out and try The Mandarin Blueprint Method course. I've been hooked ever since.

It's so good, and I'm already on character #302. I just love it. The fact that now I can look at Chinese characters and read them without Pinyin, that's the really exciting thing. I actually understand what they say. It is very fulfilling.

What would it mean for you if you succeed in learning Chinese?

I've been to China three times now. I love the place. I've got a lot of love for the Chinese people, and just to be able to communicate with them in their language is well worth it. They deserve that because they are so friendly.

I want to know more about Chinese people because they think so differently and I want to broaden my mind and understanding of the world. I would love to go to China again, but this time be able to speak fluently with the people. That would be amazing.

Another one of my goals is to be able to speak about my faith in Chinese. I've got a Chinese Bible, but it's still a bit of a mystery for me. That's the ultimate code to crack.

"Listening, to be able to listen to somebody speaking in Mandarin and think 'I actually understand that.' I'm amazed each time it happens. I love it; it's a great feeling."

Which parts of MB have made the most significant impact?

How long does it take you to learn a character (on average)?

Sometimes just half a minute. Half-minute to a minute. The movies come to mind so quickly, and because you can just draw the picture again in your mind, it just clicks. It's so clever. You think you won't remember the movie scene, but it does come back.

"Suddenly you get to a point where you think 'gosh, that actually does work, and I can read this!' You're hungry for more then, and you just want to do it again and again. It's addictive."

What results have you achieved & what impact has it had on your life?

I've memorized over 300 characters now and hundreds of words as well. It is beginning to open a door for me into the rich culture of art and literature and how such a vast number of people in the world think because the language is so different.

My Chinese friends will speak to me in English, and I will try to answer them in Chinese. They're surprised when I do that, and that's an achievement because they know what I mean. It is essential not to be afraid of failing. They will correct me which is quite good as well, and I love it when they do that.

I've made the transition from recognizing individual characters to reading sentences and paragraphs. It's a huge jump, and when I first did it I thought 'this is amazing!' and I would do it again. It's really quite exciting.

It reminded me of when I was a young student. In theological college, we were taught philosophy, and I could not understand a word of it. I used to sit in the class and think what is this guy on about? I can remember I was sitting at the desk and suddenly it clicked, and everything fell into place. It's like that with this method. Suddenly you get to a point where you think 'gosh, that actually does work, and I can read this!' You're hungry for more then, and you just want to do it again and again. It's addictive.

What were you skeptical about?

I come from an academic background, and that isn't the way you learn or teach in that setting. Perhaps it should be, but it isn't, so I thought 'is this going to work?'

I was very skeptical about 'making movies' (The Hanzi Movie Method) to learn characters. How can my Auntie Nelly appearing in a 'movie' help? But it actually did! It's quite interesting. It was really helpful to have that visual representation of the character and its components.

Now I can create a movie so quickly now that it surprises me. Although, sometimes you realize you may have done it too quickly, but the review flashcards tell you that.

I was in my 70s when I started, and people thought I was mad for wanting to learn Chinese as everybody says the most difficult language to learn. But it's not. Once you take care of the writing system, the reading system is one of the easier ones I think.

Would you recommend MB? Why or why not?

TMBM has hooked me, and I'll keep going 'til the end. I would recommend this to anybody.

I recommend it because of the simplicity of how Luke and Phil arranged it. They've given us a system that is (surprisingly) basic and simple to use, and because it's fun and it works.

I would recommend it to anybody who struggles and are fed up with textbooks and traditional methods. When I attended a Chinese course at university, the teacher was good, and she was keen to teach us, but it wasn't like this. It wasn't fun like this. The Mandarin Blueprint Method is the best, and I can't recommend it more highly.