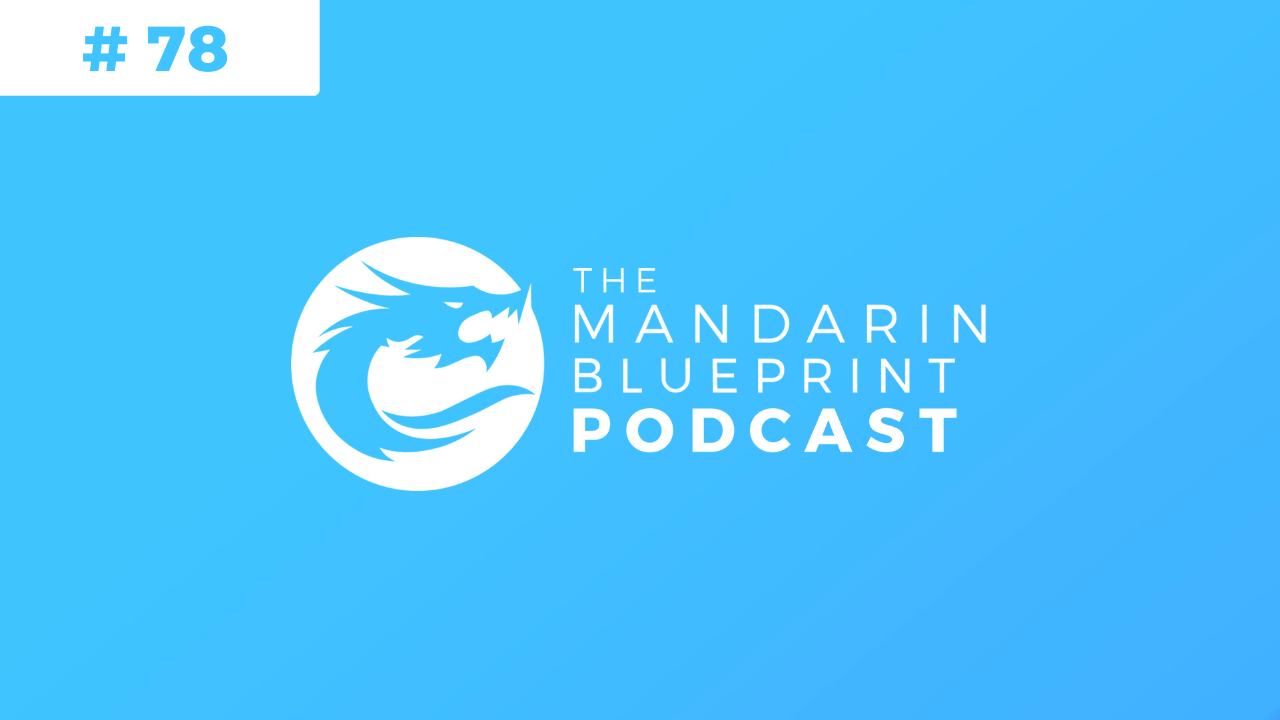 Hope all is well with you. I am using MB daily and am now at character #1212. Thanks for providing such an effective learning system!

My questions is: how much of Chinese is covered by the 1500+ characters in the course (in percent). I vaguely remember Luke saying mentioning 94% but I am unsure.

Also, what is your take on input? I am reading articles on Lingq, which is reinforcing the characters learn as well as listening to 故事FM, although I don’t have great comprehension. My problem with the articles on Lingq is that I feel like the type of language and expressions used are quite different from what I would use in a conversation, so I don’t feel great progress even though my Lingq count is increasing.

What type of content do you recommend, in terms of genre, comprehension level etc? How much time should I index towards reading as opposed to listening?

Hi everyone! I love language learning….only ever studied languages which use the Roman alphabet though. I’ve always been fascinated by China and it’s history and culture. and I believe the best way to understand another culture is to learn their language.

I thought that a language like Chinese would take a lifetime to learn……well I’m just coming to the of the free trial and have been captivated by your method of teaching and I believe that I will learn Mandarin, and it won’t take me a lifetime!

I am really glad I came across your website (purely by accident!) and am enthusiastically looking forward to learning Chinese using your system 😁

LIZ LEI ON “(BONUS) PRINCIPLE VS. REALITY IN MANDARIN“

So far so good! I am a English speaker whose family dialect is
Cantonese, and I’ve tried to learn Mandarin but as soon as I turn
away from the book/audio I revert to Cantonese sounds! I wish it
was that easy for me to understand Mandarin. I also want to pick
up writing as well as I have forgotten most of the characters I
learned as a child. Look forward to learning in this way!

Awesome online courses and podcasts that make learning Mandarin Chinese super easy and effective. Also, Phil and Luke (the owners) are both really nice guys and answer any questions you may have 🙂 Keep up the good work!

This seems to be a standalone word also meaning “to count as
something”. Am I right? Some time ago I was watching one of the
drama’s for “The Legend of the White Snake” where the demon in
one scene asked someone else “这个算不算爱?”. “Does this count as
love?”

I love the sound effects. I am immediately hooked into my
martial arts movies.

MÁIRE LIATH NÍ BHRÁDAIGH ON “PICK A PROP FOR 十“

If I pick a crucifix for my main reminder, but think a syringe
could be a more dramatic prop later on, am I okay to mix and
match?

I find the word order easier to understand with 一个 too. Is it
obligatory though?

I am finding this method really helpful! So far my son has taken
over Sean Connery’s role, and now my Grandad has joined the
party. Pretty sure more family members will arrive!

I find this method very useful and I am learning to recognize
the characters with a great sense of ease.

In my ‘si’ scene I imagine my S actor using his props to operate
the ‘jī’ machine (that I had already created in previous movie
for jī), as they are both in the same location outside my
childhood home. Handy to help remember!

LoL, Need to be more careful drinking anything while reading
this stuff.
That comment really cracked me up! 😀

‘to get along/get by’ – a tricky one to find an image for for
the anki card.

I chose an image Joey from Friends doing his ‘How you doin’?’

Would a banana peel work for 人? Having used a banana in ren, I
can’t help but see this component as the iconic banana peel that
people tend to slip on in cartoons or movies, and Mario Kart 😀

DAN ON “VOCAB UNLOCKED FROM 措’

不知所措 – cool, is this the first chengyu?

In the Chinese drama serial Ode to Joy, when one of the
characters is annoyed at someone she calls them 臭:
臭安迪不肯陪我去。

Thanks for the email. Feeling quite reassured that you got back
on a weekend. Nice to see that customer support is important, it
bodes well.

For the word connection images, I chose a clock on 1 pm for
afternoon and a set of waiting room chairs for ‘for a moment’

This is a fun word because in Chinese the same word can be used
to describe kids playing around or adults hanging out.

The corresponding word in Japanese works the same way and I have
a really funny experience with a Japanese friend years ago, who
was studying my native Finnish, and who was trying to tell me, in
a crowded restaurant, that he was going to go hang out with some
female friends later. His rendering was something close to “I’ll
go play with young girls later!” and it sounded even MORE
inappropriate in Finnish than it does in English!

Just sharing this, because it might help someone else too to
remember this word!

The Chinese way of saying yes or no is exactly like the way we
say it in Irish – repeat the verb back, either negative or
positive.

Extremely impressed with the clarity of these videos. Am finding
it incredibly helpful with my tones!

The cartoon sun runs up to her and she’s terrified.

She grabs a giant fishing hook and whacks the cartoon sun in the
face with the longer end.

Homer Simpson walks into the bathroom of my flat in Glasgow.

He sees the box from Se7en on the floor.

He opens the box, sees what’s inside and screams in rage,
TRANSFORMing Hulk-style into Arnold Schwarzenegger

JACK ON “MAKE A MOVIE 以“

by means of = by way of, so soundtrack is a riff on way: KC and
the Sunshine Band’s That’s the way (I like it)
There’s a leak from the roof and Yi character while dancing to
the song tries to catch the water drops by means of a small
fishhook and a squashed umbrella

ABIGAIL ON “MAKE A MOVIE 步“

That’s so perfect because my prop for 少 is Dick Van Dyke and he
sings a song called ‘Step in Time’ 🙂
https://www.youtube.com/watch?v=4I-b_GJ4ltk

Script: Zhulong (Chinese Torch Dragon) temporary resides in the
Bathroom of my Childhood Home together with the Joker and with
Master Yoda. Master Yoda’s planet was destroyed by the Joker.
Zhulong dragon came to save the day but arrived too late so he
could only bring Master Yoda and Joker out of the planetary
explosion. Afraid they will attempt to kill each other, Zhulong
took them into his nest to guard them until the galactic police
will come.

Arnold Schwarzenegger is measuring his biceps with CALIPERS in
the back garden of my childhood home.

Ned FLANDERS pokes his head over the fence.

“Howdily doodily neighbourino! I see you’ve got some measurin’
pleasurin’ going on over there! Now I hate to be pickly pete but
could I maybe have those calipers back when you’re done gauging
the guns? You borrowed them 3 months ago…”

Arnie throws a wad of cash into Flanders’ face.

Bob is in the bathroom of the house in Rosses Point (where I
lived with Mammy-Ann.)
A huge crucifix sprouts up from the floor, next to the bath.
When he sees it Bob covers his head with his hands and horns
start to push their way out through his skull. He manages to
climb the crucifix. I throw my razor at the crucifix which slices
it neatly in half, and Bob falls back to the ground, uninjured,
losing the horns and regaining his senses.

(I)melda found her pet snake in the middle of the LIVING ROOM
completely disjointed. This has ALREADY happened many times
before. She puts it in a CAGE and, although it doesn’t have a
door, the snake tries to get out by HOOKing its tail to the door
handle and pulling itself out. The problem is that its head is
too large to pass through the cage bars.

My “yi” actress walks into the Kitchen of my “-en” set and takes
out a Gold Bar and a Crowbar. She draws down an alchemy circle,
learned from Fullmetal Alchemist and places the items on the
circle. She then proceeds to touch both sides of the circle with
her hands and to her great delight there is a sudden flash of
light and the Gold Bar and the Crowbar turn into a hunk of
silver. Then her expression sours as she realizes that the hunk
of silver is nowhere near as valuable as the Gold was..

Since my -ch actor is Charlie Chaplin, I’ll be ‘filming’ this
movie in crackly black and white; Charlie is of course known for
silent films. The ‘noise’ from the screaming mouth (口) is
therefore unwelcome by Patrick (少) and Charlie. The intertitle in
the silent movie will be ‘A few moments later…’ before showing
that Patrick has muzzled the mouth with his hands!

Keyword : Fat
Actor : Freddie Mercury in the kitchen of my -EI set
Props : A piece of meat, a pie

Freddie was tired of seeing all the skinny girls (boys) in his
shows and decided to bake them meat pies. So there he was,
stuffing pieces of meat inside a pie in the kitchen of my -EI
set, turning them into a high-calorie food he could serve at his
shows.

After all, fat bottomed girls will make the rockin’ world go
round.

The weird grabby hand thing from the second Harry Potter film is
knocking on my desk annoyingly and incessantly.

Walter White is sat behind me and has had enough of this. He
spins round on his chair and stabs the hand with his trusty
halberd to shut it up. He yells:

Robbie walks into my friend Penny’s kitchen, and there’s a giant
banana which is throbbing and twitching. He grabs a samurai from
the counter and slashes it open. Penny comes out, covered in
banana gunk and hoping she can get cleaned up before her mother
sees her!