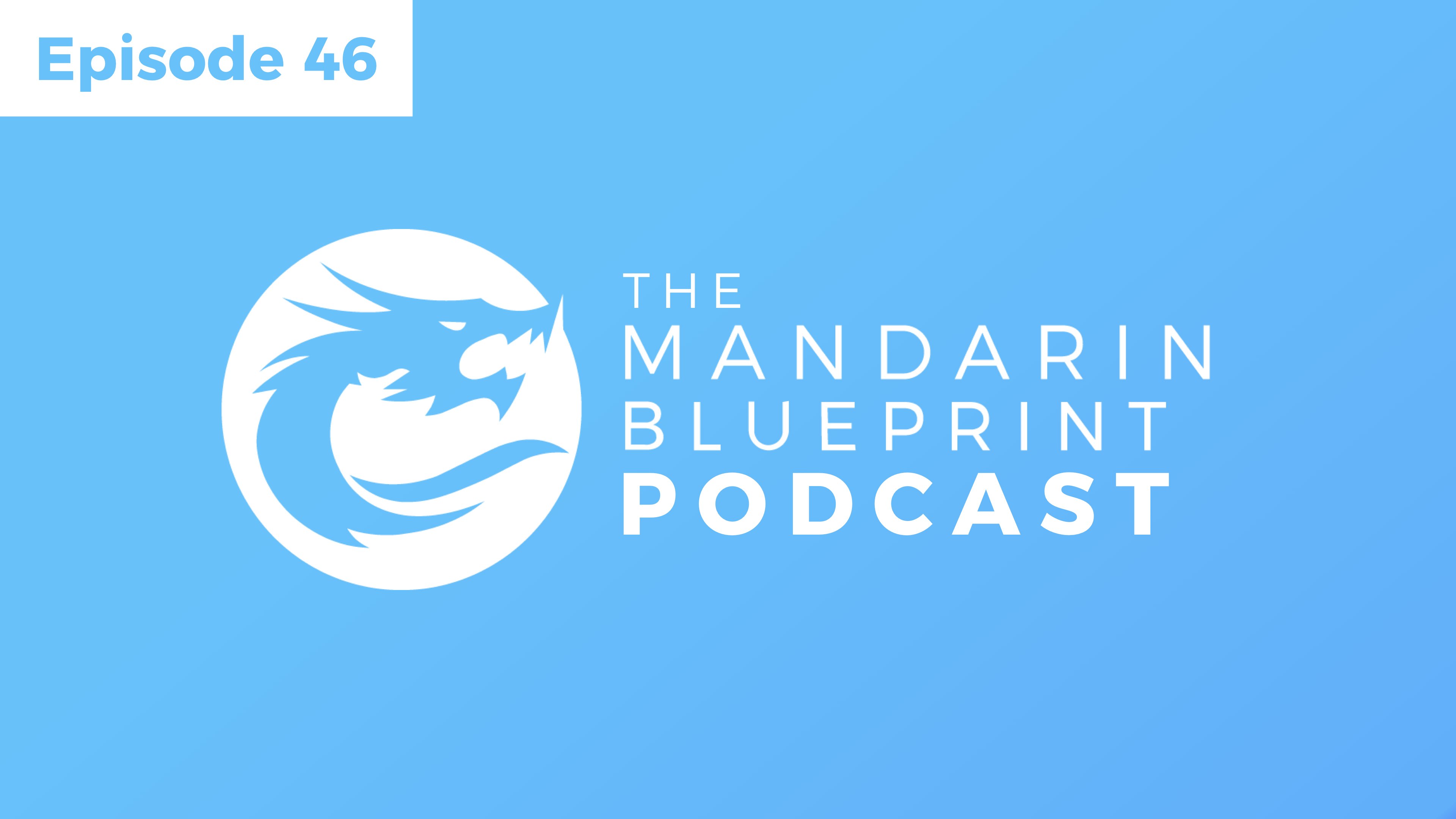 My name is Anuj Agarwal, I’m the Founder of Feedspot.

I would like to personally congratulate you as your website Mandarin Blueprint has been selected by our panelist as one of the Top 15 Mandarin Chinese Learning Podcasts on the web.

I personally give you a high-five and want to thank you for your contribution to this world. This is the most comprehensive list of Top 15 Mandarin Chinese Learning Podcasts on the internet and I’m honored to have you as part of this!

We’d be grateful if you can help us spread the word by briefly mentioning about the Top 15 Mandarin Chinese Learning Podcasts list in any of your upcoming post.

Since I went with a single bat for xi, I decided to just do a colony of bats for this prop.

Kiefer Sutherland from the movie The Lost Boys (Vampire).

Matt Damon from the movie “Good Will Hunting” when he was working as a janitor at the University.

SpongeBob, because he always says “Orderrr up!”

Since it looks like the pi symbol π, it could be an apple pie perhaps?

Also consider that in Goethe‘s drama, Faust makes a deal with the devil to exchange his soul after his death for unlimited knowledge during his life on earth

Go – the board game.

Starters Blocks – on your marks, get set, go!

Going with Bugs Bunny, but anyone from the Bugs Life movie should work as well!

Going with Archer from the tv show “Archer”

Going with one of the french art berets

Chinese mythology
ju – Ju Shou (Dragon spirit of the West)
He is a messenger of the ancient Sky God. He lives in and controls the West of the world, oversees Fall, brings bad luck and is rather unpopular. Male Spirit in charge of messages. (Also known as Ru-Shou).
( I chose just the pinyin for the way it sounds.)

This blog post explains the theory behind sets and pinyin finals.

I’m having trouble with places(sets) because when I think of a really significant one, there is no kitchen (workplaces, gym, school, hotel, post offices – I tried envelope). I managed to envisage a set for -an with Andes and my favourite camping spot, but I had to use the tent as the bedroom and imagine my cooking area for the kitchen and so on. It’s not coming so easily with -en and I’m getting discouraged to think I have to come up with even 10 more! Objects are obviously easier. I guess the rooms are throwing me off a bit and the list isn’t helping to associate with a house or apartment… Help!

I used to live in a house on ANtelope Way! Easy 🙂

I also went with my first residence in China: my friend’s apartment in ChENGdu. Really loving the MB method so far; it’s a breath of fresh air after trying and struggling to learn only spoken Chinese.

Samuel L. Jackson is in the front yard of my childhood home dressed like a surgeon. He is using a forceps clamp and dagger to pierce the tongue of the Rolling Stones mouth.

My daughter is home from her first semester of college and we are hanging out in the kitchen of my childhood home. She now thinks she knows everything and decides she wants to debate me and says I can choose from two TOPICS. On the table she puts a skull from Shakespeare’s play Hamlet and next to it a copy of the Constitution. She tells me the TOPIC we can debate is either Shakespeare or U.S. Politics. I pick U.S. politics since I always win.

The setting is the dead of winter (冫) in the kitchen of my -e home during the post-apocalypse. George Washington is at the butcher block with a tough decision to make; his horse has just died and his Great Dane is starving. He finally decides reluctantly to prepare the horse’s head for the dog to eat.

Jack Black is lying on my -e set roof in the middle of the night look[ing] through a spyglass. At the end of the spyglass you see Jack’s giant, blink[ing] eyeball. Then you see he’s count[ing] sheep with the spyglass so he can fall asleep.

My y actor is in the backyard of my ang set playing with giant, life-sized Legos. They set the tree (木) and sheep (羊) pieces side by side and express their joy that they are the same (样) size as the real thing.

Bill Murray, moonlighting as property manager of my -an apartment building, is in my bathroom. He is exhausted from all the issues he has to deal with in that position. He looks in the mirror, splashes water (丶x 2) on his face, and melodramatically tells himself, “Heavy lies the crown.” (力)

*Bill Murray is my -b actor. A crown is my prop for 力 to represent power.

Bear, and the Sloth and Brain are acting out the scene from the “Be prepared” song from the Lion King.

Or should I say… “Bèi prepared”?

I am with Gary Oldman in the backyard of my in laws house who is busy writing out the script for his new movie titled “Enough” where he plays one of the creators of the Mandarin Blueprint who had had ENOUGH of traditional methods of learning Chinese and decided to start their own course. He only has the title written down and a few sentences describing the opening scene. As we hyper lapse though the day and dusk approaches, a large colony of bats begin flying around his chalkboard and he says, “Well, you certainly have ENOUGH bats around here”.

I’m in the backyard with the Black Mask and Matt Damon as they are rehearsing for the new action movie they are starring in. They are doing a scene where they have to walk step by step in unison, but Matt Damon is carrying a stop sign and he has his broom so he is much slower. They keep having to redo the scene because Matt Damon keeps missing several steps since he is not as fast as the Black Mask.

*See Ija’s Scene Below for Backstory*

Guan Hongfeng has come to America as he is on the trail on Gru from Despicable Me who has been selling fake Chinese artifacts and claiming they are very EXPENSIVE. He had heard he was now selling them out of his trunk in this parking lot. He brought a sample with him as well as a razor blade and showed me how Gru made them using the razor blade and seashell and then he wrapped them in the Chinese flag. He also showed me a printout of the ebay bids and how EXPENSIVE they sold for. I told him I didn’t know where to find Gru, but that I did see some minions walking around downtown.

I have heard “shen me” pronounced as “sen me” – I assume for the same reasons.

It starts to get a little more complicated as we start learning pronunciations that are spelled the same with the same tone, but have different characters and mean something different if they are used as a noun, verb, etc. (examples: dan/daybreak and dan/but, or hua/transform and hua/talk. ) Uses the same fictional character, same set, same set room or backyard, but different props. Any ideas or suggestions on how to keep from getting these mixed up when trying to remember the differences. I thought about trying to think of one as a word and the other one as not a word but that idea doesn’t seem to word when I noticed but is a word and daybreak, is not. In English I’d think of daybreak as a word and but as not a stand alone word. Any ideas or suggestions would be greatly helpful!

Sorry, after listening to the videos again I think ya’ll covered how to help best memorize these.

This Study of “So Bad It’s Good” Movies by NowYouSeeIt helps explain why bad acting (“camp”) works so well: https://youtu.be/jGiqc3HSxEg

OMG! Thank you. The tongue position makes all the difference in the world. My pronunciation has been the biggest obstacle for me in actually attempting to speak Chinese to someone other than myself in the mirror. I’m a new student but already your course is really helping me gain confidence to actually speak to people in public.