The Sounds of Mandarin Chinese

We talked about Mandarin tones the last two weeks (Article 1 on Tones, Article 2 on Tone Pairs), but as a commenter on Facebook Evan Curtis pointed out, tones aren’t as important to master as other components of Chinese sounds.

Since Mandarin syllables are so key to success, we’re going to cover two main points today:

How can we break down a Chinese sound? 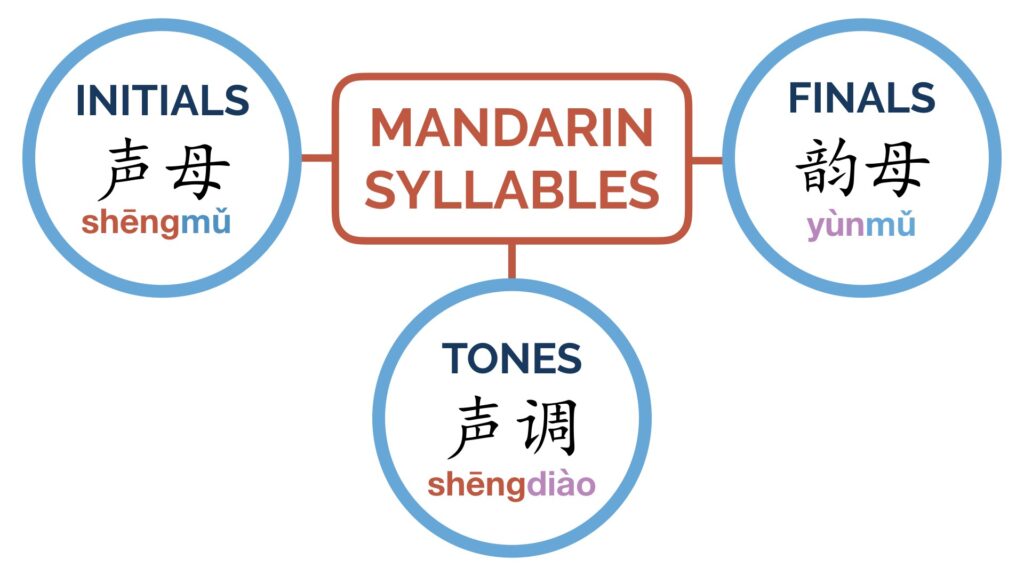 As you can see from this picture, there are three components to a Mandarin sound. Tones, Finals & Initials. “Initials” and “Finals” can be conceptualized as consonant & vowel sounds respectively. That’s it. Every sound in Mandarin Chinese has a combination of these three. Sometimes there is no “Initial” (e.g. ài, ān, wǎn, etc), but there is always a tone and a final.

Before we detail how Initials & Finals function, let’s look at a few examples:

*Note the umlaut over the u (ü), it is an extra vowel in Chinese that English doesn’t have. More on that later.

**When a Mandarin Syllable is written in Pinyin, it has a tone marker. If there is no tone marker, it is 5th tone.

You’ve likely now got an idea of how these sounds work, so let’s go into more detail about each.

Simple finals are the 6 basic vowels of Mandarin Chinese. They are the same letters (although not pronunciation) as English with the exceptions of ü. Think of the simple finals as your building block vowel sounds for Chinese.

Compound finals are combinations of simple finals, at least in spelling.

In terms of spelling, simple finals combine to make compound finals. Sometimes the pronunciation of an individual vowel sound will change, but the building blocks are the same. There is one exception, the completely unique “er” final. Luckily it’s easy and very pirate-y to say ;-D.

Nasal Finals all start with one or two of the simple finals in spelling, they all end in “n” or “ng”

34 syllables in Chinese do not contain any initial. These are indicated with a ø symbol. They are listed below:

There are 21 initials in Mandarin Chinese, aka there are 21 consonant sounds.

You should be aware of which syllables are easier or harder to enunciate from the perspective of an English speaker. We’ve segmented the initials into three categories: Easy, Tougher & Problem

The easy initials have no major distinguishable difference from English. Great news! Attention level necessary: Low.  They are listed below along with every simple final they can be combined with:

These initial sounds do all exist in English, but they are not pronounced as you might think. Interestingly, if you master the “tougher” initials, you’ll impress Chinese people even more than the Problem initials. It shows you’ve gone into greater detail in your understanding. Attention level necessary: Medium. They are listed below along with every simple final they can be combined with:

These are the ones we will focus on most throughout learning Chinese. Why? They don’t exist in English! Not to worry though, we know exactly how to train you on the 3 new tongue positions you’ll need to say these just like a native speaker. Attention level necessary: High. They are listed below along with every simple final they can be combined with:

Many of these pronunciations are not pronounced how you might assume they are based on English, but we’ll address those in future blog posts. Of course we also cover everything about Chinese pronunciation in our Pronunciation Mastery Video Course Curriculum as well.

Now that we’ve done this, we’ll address the second point we want to cover today…

IS IT EVEN WORTH IT TO LEARN HOW CHINESE SOUNDS FUNCTION?

You might be thinking “Why wouldn’t it be worth it?”, but think about it for English. English has approximately 16,000 syllables. Would you recommend to an English learner to master how all syllables work before studying? No way. If you could snap your fingers and know all English pronunciations, anyone would agree what a huge advantage that would be when starting to learn vocabulary & grammar. That ain’t the reality though, so you might as well forget about it, hypothetical English learner!

What about Mandarin Chinese?

Consequently, the perceptual frame of reference for learning the language changes. It IS actually possible to learn everything about Mandarin Chinese pronunciation before going deep into characters, vocabulary & grammar. Now that you know that, can you see the advantage you’d have moving forward? Just break it down. You need to learn the tones, 3 types of finals & 3 types of initials. It’s doable. Not overnight, sure, but within a few weeks absolutely.

Think about what this would do for you. Every time you learn a new character, you know how to say it. You don’t have to lack confidence in starting to use it in conversation. You’ll run into the (good) problem of Chinese people thinking you speak Mandarin way better than you actually do because you pronunciation is so wickedly accurate. When you hear Chinese people speak, you’ll know what syllable their saying. That helps bridge a gap between what you listen to and words you read. If you read a new word, and really _deeply understand_ how to pronounce it, you’ll get it when a native says that word. If not, you miss a chance to learn. Bummer.

So is it worth it?

Hell. Yes. We are so sure, that when we asked ourselves the question “What should we make first for our planned video courses?” there was ZERO hesitation. PRONUNCIATION FIRST. We have loads to say about the other aspects of Chinese. We even built a whole course around learning characters faster than anywhere else on the internet. Doesn’t matter. Pronunciation first. After that, Chinese sounds will follow you for your ENTIRE journey of learning Mandarin. Want to become a scholar of ancient Chinese classics? Pronunciation is what you need. Just want to impress your Chinese trade partners in business? Pronunciation is even MORE key.

As with pretty much everything we do here at Mandarin Blueprint, we’re harping on this because we’ve been there. We know the mistakes that foreigners consistently make, and we know how to help. Nail pronunciation, you’ll set yourself up with the fuel to take off like a rocket.