29 October, 2018
Categories: Series: What is the Hanzi Movie Method? 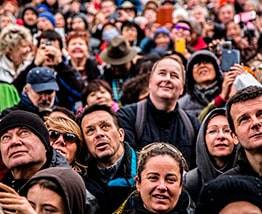 The Hanzi Movie Method is a mnemonic system for learning Chinese characters. It is the most critical subset of our larger curriculum The Mandarin Blueprint Method. This is part four of a series explaining the method. Click below to navigate the various parts:

P.S. If you are brand new to Chinese characters, we recommend first checking out our series:

NOTE: We based this post on the Hanzi Movie Method Pinyin Chart, which has different categorizations for “Initials” and “Finals” than the original chart. While applying the method does not require an understanding of why we made these changes, if you are curious you can refer to the handout titled “Why (and How) is the HMM Pinyin Chart Different from the Original?”

Actors & Facial Mnemonics: How it Works

In the Hanzi Movie Method, there are 55 “actors” in total, which we split up into four distinct categories. Here they are:

The actors within the blue category of initials on the left are represented by males.

The actors within the pink category of initials are represented by females.

The actors within the green category of initials are represented by fictional characters.

The actors within the purple category of initials are represented by either Gods or world leaders.

Let’s look at why we have done this in a bit more detail.

The actor you choose should give a clue to the pronunciation. For example:

We base most of the examples on first names, but feel free to link a Pinyin initial to a surname or nickname as well.

Some syllables do not contain an initial (e.g., ao, an, en, etc.) However, we MUST have an actor in every scene. We categorize these syllables as having a ‘Ø Null’ initial, and the actor is always Jackie Chan. We chose him because he’s so well known, but go ahead and choose somebody else if you like.

The Pinyin syllable “er” is unique. It doesn’t follow the same system of initials and finals as the rest of the chart. What to do? We solve this by calling “er” a ‘Double Ø Null.’ Ø Initial + Ø Final = Jackie Chan in your childhood home.

REMINDER: Standard Pinyin changes any “i” with no preceding consonant to “y.”

To solve this problem, all you have to do is re-categorize what is considered an “initial” by taking the “i” and tacking it on to the consonants listed above (b, p, m, d, t, n, l, j, q, x).

These combinations of “consonant + i” are represented by Female Actors. Again, for a more detailed explanation check out this Google Doc.

The actor you choose should give a clue to the pronunciation:

Combining with the Final “-ou”

REMINDER: When combining initials that have a “consonant+i” structure (i.e., di, ji, li) with the final “-ou,” standard Pinyin drops the “o” as such:

So remember all combinations of this type (diu, jiu, liu, etc.) take place in your “-ou” ‘Set’ with a female ‘Actor.’

Female actors represent the sound associated with simple final “i” (i.e., the one that rhymes with the vowel sound in “pee, tee, glee, etc.”) Despite having a letter “i” in the spelling, “zhi, chi, shi, ri, zi, ci, is” don’t actually contain that “ee” sound. We call them “the fake i” pronunciations. Consequently, we put them into the “male” category so that all female actors consistently represent the sound and not the spelling.

Make sure to choose characters that are from the fictional universe, and likewise choose male or female actors who are real people (alive or deceased are both acceptable). For example, if you want “Tony Stark” (Iron Man) for “tu,” then try to show him in his actual suit.

REMINDER: Standard Pinyin changes any “u” with no preceding consonant to “w.”

Combining with the Final “-ei”

REMINDER: When combining initials that have a “consonant+u” structure (i.e., du, gu, hu) with the final “-ei,” standard Pinyin drops the “e” as such:

So remember all scenes with this set of syllables (dui, gui, hui, etc.) are shot in your “-ei” Set with a Fictional Actor.

Combining with the Final “-en”

“U+en” is the same pinyin vowel occlusion as “u+ei” directly above. The “-en” sound is still pronounced, but the “e” spelling drops out.

So remember all scenes with this set of syllables (dun, gun, hun, etc.) are shot in your “-en” Set with a Fictional Actor.

NOTE: There are only six representatives of this category. If you can think of an alternative six ‘Actors’ who fit into a clear & distinguishable category, go for it. We once had a student who chose six communist dictators to represent the six “Ü” initials. To each their own, however, it is essential to be sure that whatever category you pick is visually self-explanatory so that you don’t confuse it with the male, female and fictional actors.

Some Inspiration for Choosing Gods

A good source for choosing gods can be the Ancient Greek & Roman gods, but you can also consider gods from any other religion, or even movies (i.e., Thor & Loki from The Avengers)

Some Inspiration for Choosing World Leaders

There are a ton of world leaders to choose from that you can connect to the six pronunciations within this category, and for each lesson where this becomes relevant, we give you a trigger list.

REMINDER: Even though they don’t all have the umlaut (“ü”) they are all pronounced the same way.

You’ll be shooting scenes with the 55 actors you choose for a long time to come, and so having a variety of personalities is crucial in preventing boredom with the method. Luckily, there are extraordinarily few things in this world that vary more than the personality traits of individual people. Use this fact to help make your scenes richer & distinguishable from one another. Darth Vader is not going to react the same way to having a banana thrown at him as your cowardly friend from middle school, and that’s half the fun. Oh, and about that, don’t forget to HAVE FUN! 😀